Why Not Liking Cats is Misogynistic

Published on September 30, 2021 by theobserver 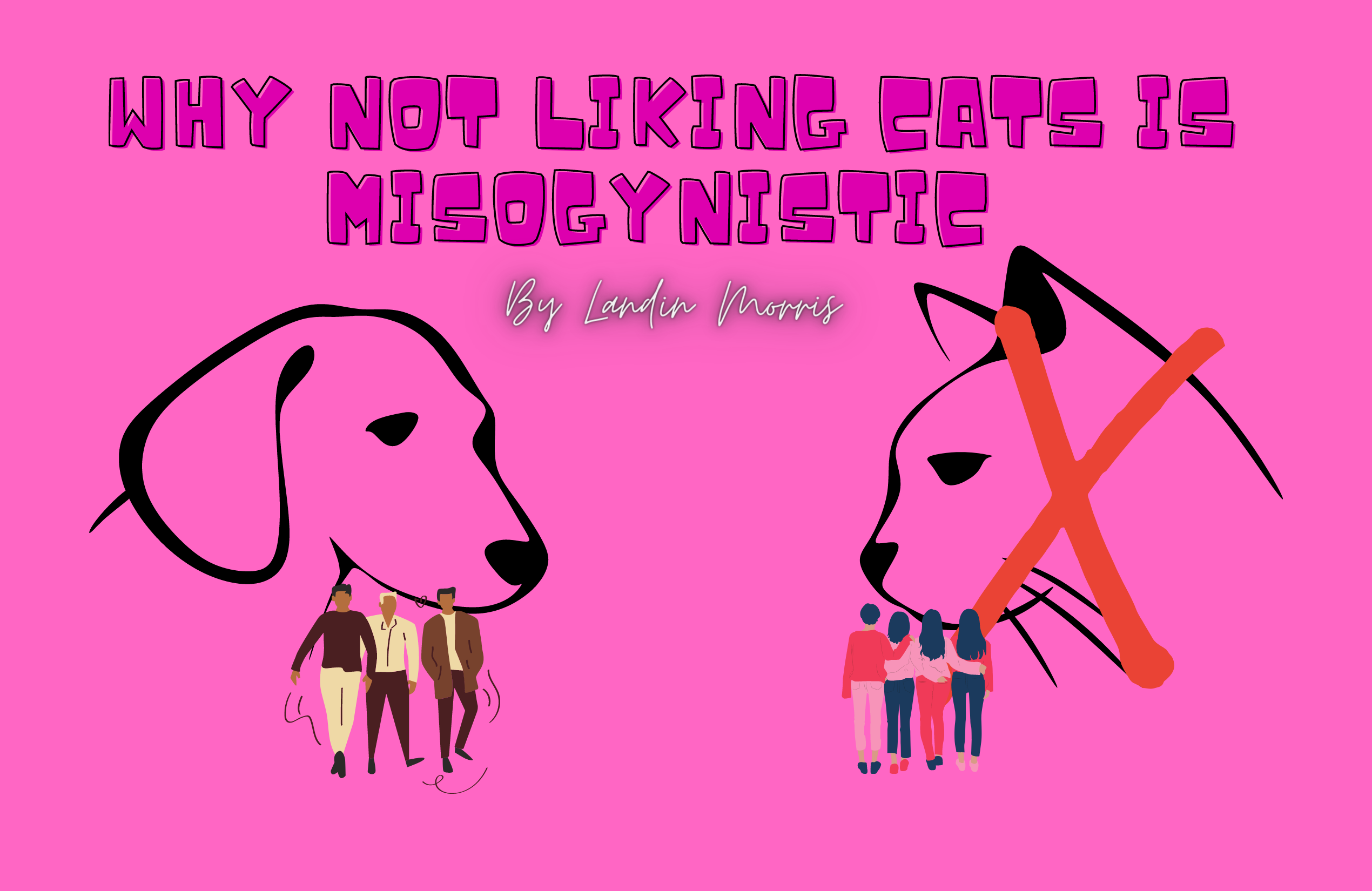 The most common pet question asked is, “Are you a cat or dog person?” While many believe the answer comes down to preference, your response reflects biases in your personality.

Dog people are considered more social, friendly, and outgoing, while cat people are known for being introverts, creative, and independent. Essentially, cat and dog people are expected to exhibit characteristics of their preferred companion.

But this concept becomes problematic when one recognizes the gender association between varying characteristics. To be protective and loyal like a dog is considered masculine versus being agile and timid is seen as feminine. This affiliation has resulted in our association with dogs as men and cats as women.

Similarly, we apply cat and dog adjectives to describe men and women socially. A man who cheats on his wife is called a “dog”. The term has also been normalized in slang to signify closeness. As Smokey says on Friday, “that’s my dog,” to reference his best friend after winning a brutal street fight. Women who are promiscuous or feisty are called “catty”. The term “cat fight” is used to describe a fight between women. Women who receive unwanted attention for their beauty are often “catcalled” in the streets. Even the term “pussy,” (slang for vagina) is derived from the term puss, a word that symbolizes cats.

Since masculinity and femininity is equated with men and women, the usage of cat and dog adjectives socially applies gender to both pets. This social framework labels men as dogs and cats as women. Essentially, this correlation means that many don’t like dogs and cats for the same reasons they don’t like men and women. However, this doesn’t mean that everyone who hates cats is misogynistic. Rather it implies that people who despise cats for trivial reasons may align with sexists’ ideals. Those who validate their dislike for cats with the following explanations may adhere to gender bias.

One of the most common arguments, people who hate cats often dislike them for their disobedience. Unlike dogs, cats are known for being more independent and self-sustaining. Making them less obedient than their canine counterparts. This argument alone is filled with multiple defects in addition to its misogynistic implication.

For starters, cats are obedient. They’re obedient in many of the same ways dogs are.

Like dogs, cats are taught potty training. Some cats have even been trained to use the toilet. We also encourage both dogs and cats to chew, play with, and scratch their toys instead of our beloved household items and clothes. Cats can also be harnessed and trained to walk on a leash like dogs. However,  training for a cat is different from training for a dog, and many fail to educate themselves on that difference. This ignorance deceives people into thinking that cats aren’t trainable.

Still, due to their independent nature, cats are less inclined to please their owners compared to dogs. This is because dogs were bred to serve humans. Dogs were domesticated to help assist humans in various endeavors such as hunting, herding, and protection. Given that dogs are pack animals, they’re instinctually inclined to obey their alphas. Man has designed dogs to be our best friend because we need them for survival. The domestication process has naturally instilled dogs with the willingness to obey us.

However, the history of cat domestication isn’t concise. Many archaeologies have documented cats in Egyptian art, hieroglyphics, and remains. Research has revealed that cats were associated with deities and protection in Egyptian culture. These findings suggest that the Egyptians domesticated cats. Yet there is more evidence supporting a different theory. According to International Cat Care, cats first appeared around 10,000 years ago in Israel when humans began to store grains. Since the storing of food attracted rodents, feral cats began to migrate to human settlements to prey upon field mice.

Although cat domestication remains unclear, it should be noted that the domestication of cats didn’t involve an explicit task. Because cats instinctively hunt, none of the services they provide are for humans. Given that cats were domesticated with no true purpose, they don’t share that willingness to “people please” like other domesticated animals.

Furthermore, cats relate to women in this fight against control. Dogs relate to men because they’re born into a system that serves them. Given that most civilizations are founded on a patricharial structure, men can easily assimilate into spaces and align with other men, like wolves in a pack. Women being minorities in a patriarchal society, are often the only if not one of the few to occupy all male spaces. The inability to create their own community leaves them vulnerable to being sought after by other men who attempt to control them for selfish reasons.

Another notable difference between cats and dogs is their friendliness. Because dogs are pack-orientated animals, they’re often more compliant with meeting new people and interacting with strangers. Compared to dogs, cats are more consensual. They require trust and understanding before they fully reveal themselves to you. To gain a cat’s trust, you must respect his boundaries.

Those that ignore cat boundaries are often bitten or scratched. Most aggressors will then use that experience to justify their hatred for cats. This cycle of violation and victim-blaming is another way in which cats symbolize women. And because cats are physically inferior to dogs and humans, they are more prone to experience abuse or neglect.

Women often endure a very similar trauma. Women who are aggressively sought after are forced to become combative and are then criticized for being direct. In both instances, people who don’t respect boundaries provoke women and cats into being protective and then scold them for doing so.

Furthermore, the generalization of cat behavior also relates to how women are perceived socially. Whenever a man acts inappropriately, his actions are attributed to him individually. But when a woman acts inappropriately, her actions will often be attributed to her sex and gender identitiy. Essentially, women as a whole are condemned for reenacting the same behavior men promote.

For example, when rappers Cardi B and Meg Thee Stallion released “WAP”  in 2020, they were condemned for their sexually explicit lyrics. Soon critics began to apply WAP’s criticism to all female rappers. In an interview, rapper Ceelo Green accuses the two artists of tarnishing the rap community’s reputation.

“Attention is also a drug and competition is around. Cardi B and Megan Thee Stallion, they are all more or less doing similar salacious gesturing to kinda get into position. I get it, the independent woman and being in control, divine femininity and sexual expression. I get it all but at what cost?”

As the interview unfolds, Ceelo Green begins to apply this critique to all female rappers. This kind of criticism shames female artists for rapping about their sexuality. Yet no one spoke when Dababy released his song “Nasty,” in which he details how he sexually violates his female partners. Note how it’s acceptable for men to promote their sexuality in music, but not women. The effects of generalization make this double standard more damaging for women. From this perspective, cats represent women through the detriments their reputation receives from generalization.

Another way misogyny is perpetuated in the pet trade is through denotations. Society has created conflicting reputations for cat and dog owners. These reputations correlate to the stigma surrounding both genders.

For example, the term ‘man’s best friend,’ is a connotation frequently used to refer to dogs. The inclusion of men in the terminology illustrates how dogs are attributed to men socially. Note how this connotation has no negative implications and is exclusive to men. Compare this to the denotation of a ‘crazy cat lady,’ and the realization of gender bias in the pet trade becomes all too prevalent.

However, the dog connotation has positive implications compared to the negative implications of the cat denotation. The relationship between men and dogs is often viewed as a father and son relationship. It’s seen as playful, loving, reliable, and fun. Yet the relationship between cats and women is seen as eccentric, lonesome, and problematic. Women who own multiple cats must fight the stigma of being seen as an aberration. Meanwhile, men are permitted to own any number of dogs without experiencing any hindrance to their reputation.

The implications of both phrases depict how women are always put at a disadvantage. Most of the ways in which cats relate to women is through their oppression and strength. Cats relate to women because they endure similar social pressures. To dislike cats for the aforementioned reasons may suggest that one’s pet preference is influenced by sexist ideals.