Unchecked Trump Supporters Storm the Capitol: How Did We Get Here? 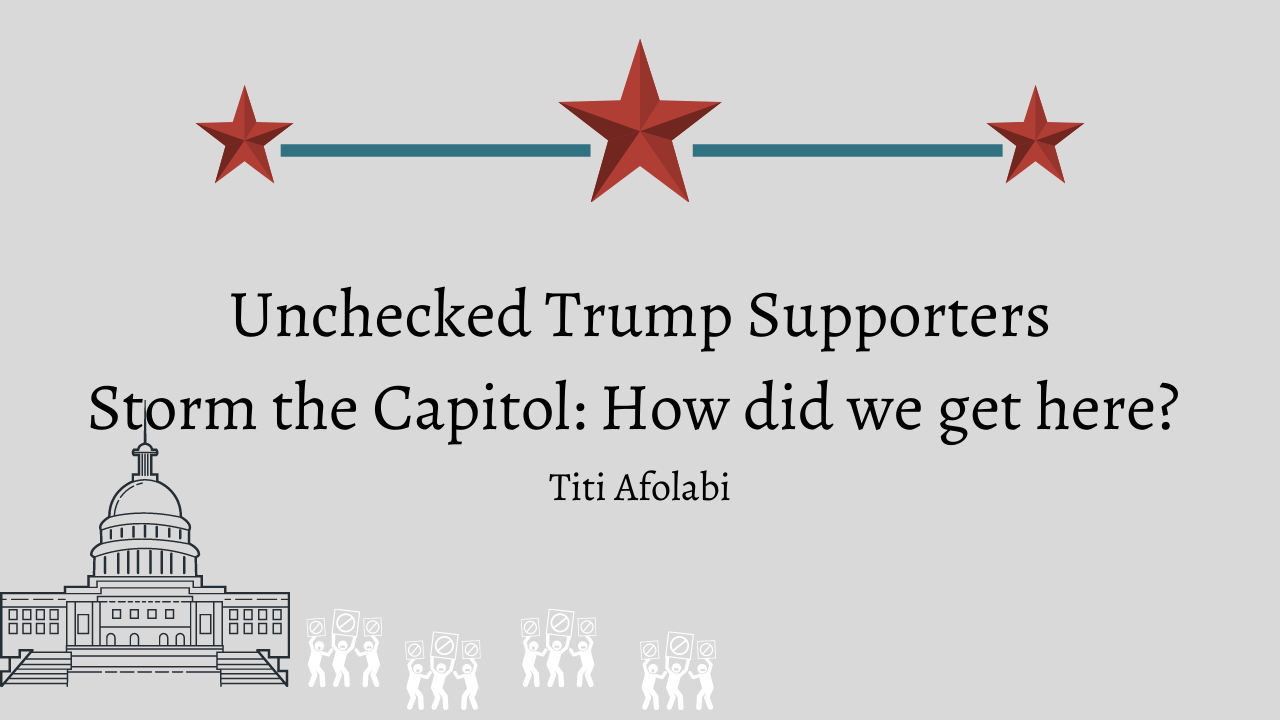 This past Wednesday, January 6th, America experienced one of the most unprecedented events in modern history. Most of Generation Z have not witnessed an event as seemingly unexplainable as the storming of the Capitol. We are taught about the tragedies experienced during slavery, the Jim Crow Era, World War I and II, etc., but no one would expect groups of White Supremacists, anti-Semites, and Neo-Nazis operating under the guise of patriotism in 2021.

Many Americans from across the political spectrum have spoken about the chaos. Some have confessed to being in utter disbelief that this could be possible in American history, with language along the lines of “This is not who we are” or that the terrorizing behavior is “un-American.” However, the tragic reality of American history, coupled with the effects of ‘Trumpism,’ have sadly been the American way over the past four years.

Donald Trump’s election back in 2016 left some Americans with a lot of hope for the future. Some felt left behind under the Obama administration, whilst others saw hope in Trump’s radical plans to “Make American Great Again” through xenophobic immigration policies, his explicit sexism and racism. On the other hand, his election day symbolized one of the scariest and unexplainable days for those who strongly opposed his beliefs. We suddenly had to take a double-take on the version of America we thought we knew. Throughout his term, he perpetuated and mobilized discrete racism and xenophobia, allowing them to be central to his persona as a populist president. He has given Neo-nazis and white supremacists the green light to confidently spout their hatred and unjust philosophies.

When I think about what we saw at the Capitol, it was not a situation that arose suddenly. Trump’s continuous denial of the 2020 election results and fraud claims catalyzed the riots and sedition. I believe it was said best by NY congresswoman Alexandria Ocasio-Cortez: “If a presidency doesn’t reinforce your power, you believe it is fundamentally illegitimate.”

During these past months, Trump’s language was all carefully chosen and deeply coded to promote suspicion as well as motivate reactions a “rigged” election. This was the tangible evidence and reasoning to explain what happened on capitol hill. Nonetheless, the deeply rooted hatred and entitlement in Trump’s supporters cannot be denied as another trigger for the attempted coup on the Capitol. For the past four years, his dog whistles to his base have promoted rhetoric and propaganda that fueled their action.

There were many Instagram posts and tweets comparing this summer’s Black Lives Matter protests and riots to the domestic terrorism from Trump supporters. The most recurring statement pointed to white privilege regarding the response garnered from police and the president himself. While that is an accurate claim, the insurrection on January 6th is not simply about white privilege, but the entanglement of white supremacy in our political world. It is about the deep rooted, unabashed racism and disruption of any small resemblance of democratic ideals that we hold. It is that we are not ashamed that the “most remarkable country on earth” American citizens and “patriots” walking around the Capitol holding confederate flags proudly or rocking t-shirts with slogans “6MWE” (6 million wasn’t enough). So this overt display of neo-Nazis and white supremacists is not just about white people having more rights and freedoms in America; it is about their fundamental disillusionment from reality and beliefs so far from truth and reason.

We live in a country that invades and hosts wars in the Middle East to fight against corrupt leaders and coup attempts, yet on our soil, we cannot seem to get a grip on the roots of white supremacy. Perhaps the question is not how did we get here, but rather why are we still shocked that we have not left here.