The Division Between Politics and Sports 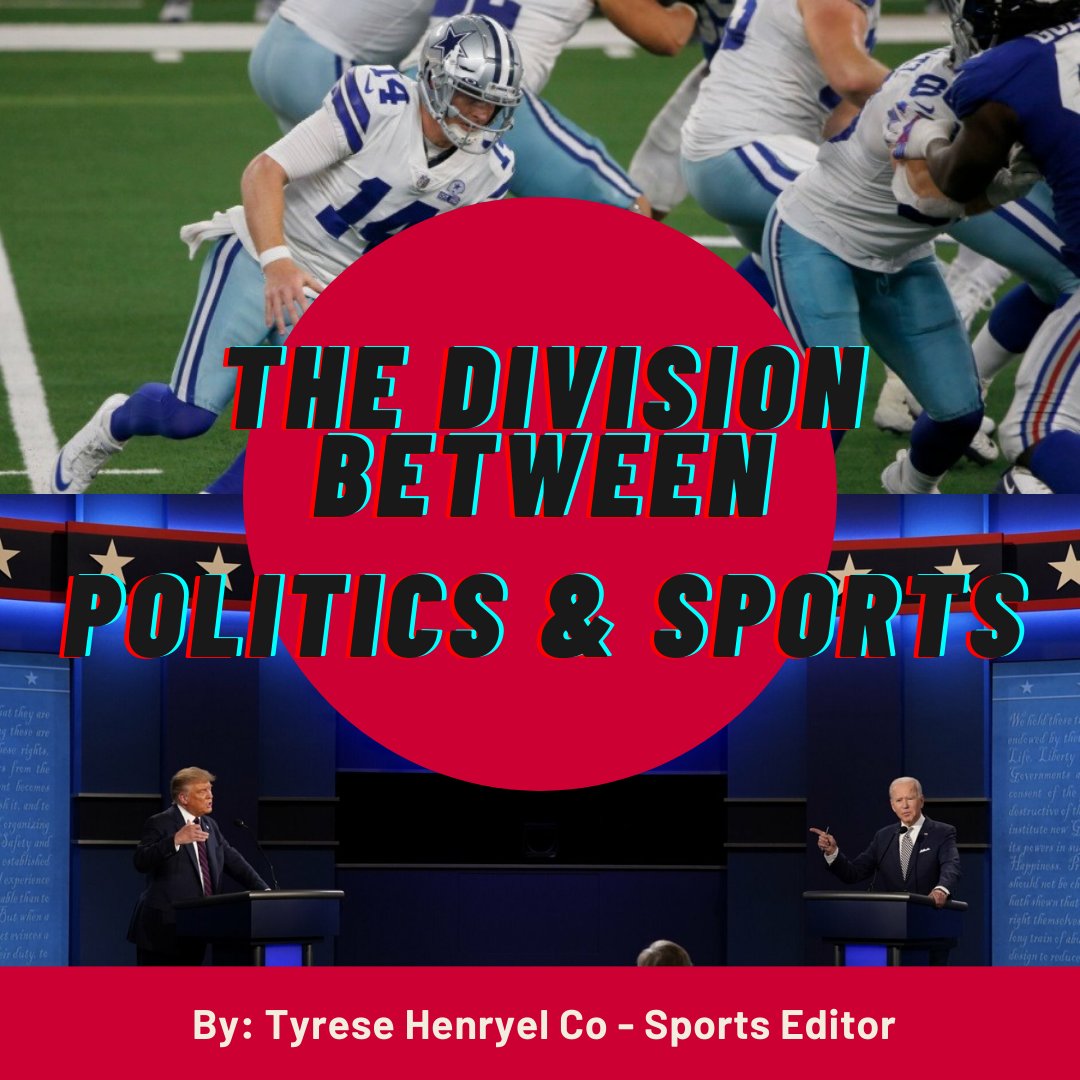 The United States as of late has been an interesting case study when regarding human life and basic rights. Our president, Donald J. Trump,  denies the existence of a virus that has affected millions and  has killed thousands globally. He undermines the cries for equality from a group of people that deserve basic human rights. He also slanders any sports that stand to support this marginalized group of people.

Recently the sports world has shown its support for the Black Lives Matter movement and conservative sports fans don’t seem to differentiate the player they see and how they choose to support the movement. The division starts on social media pages, and news networks criticizing athletes for having an opinion and using their platform for something that is progressive for their people in their communities.

Who can forget the questionable statement made by Laura Ingraham of FOX news, telling NBA superstars Lebron James and Kevin Durant to “Shut up and dribble” after they made comments about the troubling status of a country that they are both a part of and have a constitutional right to speak about.

We see huge internet social platforms post something about social injustice and the conservative user comments usually sound like, “Keep Politics out of Sports” “All Lives Matter” and etc., just completely ignorant to what’s happening in our country and why these huge sports pages are pushing this agenda so hard.

The problem that our country has is people have a hard time listening to the problems of minorities from someone with status. We see comments now stating, “Says the guy who makes millions for playing sports”, this is not the point. African American sports stars use their platform because it’s difficult for the limited general population to effectively spread awareness of injustice. These stars have social followings that are in the ranges of 1 to 100 million people and this platform has been effective in bringing together a community of fans and non-fans alike.

The bridging of sports and politics is something that should be looked upon as a positive and progressive advancement in our country no matter the side you represent, it is more apparent now more than ever with the blatant attempts by President Trump to create a hostile divide between liberals and conservative voters.  Now is the time that sports can be an advocate for change in the world. Whether it’s posting on social media or wearing gear that gives a message supporting social justice it has spoken volumes to the level of advocacy these celebrities show for this cause. Despite what the media may portray about these athletes and their luxurious lives, NBA NFL, NASCAR, NHL and MLB has shown solidarity on this matter despite the backlash they may face from members of their fanbase have a differing opinion, or maybe even slander from the leader of our great nation.

Our country faces a lot of social issues and these issues bleed into the very fabric of our society. Professional sports, which isn’t usually associated with politics has forced its way into the conversation, utilizing the first amendment of the constitution — free speech. Yet, we see nothing but attempts to suppress the voices of these superstar athletes. I have a small message for the people that are confusing sports and the significance of  having a voice in political matters, shut up and listen to these people, they are invoking a positive change in their respective communities and you have no right to suppress their voices. Hopefully in the future this topic would be something that’s laughed upon by society and equality becomes a goal that is obtainable through the efforts of African American community as one no matter the status.