Mandatory Vaccination is Met With Mixed Emotions at Rutgers University 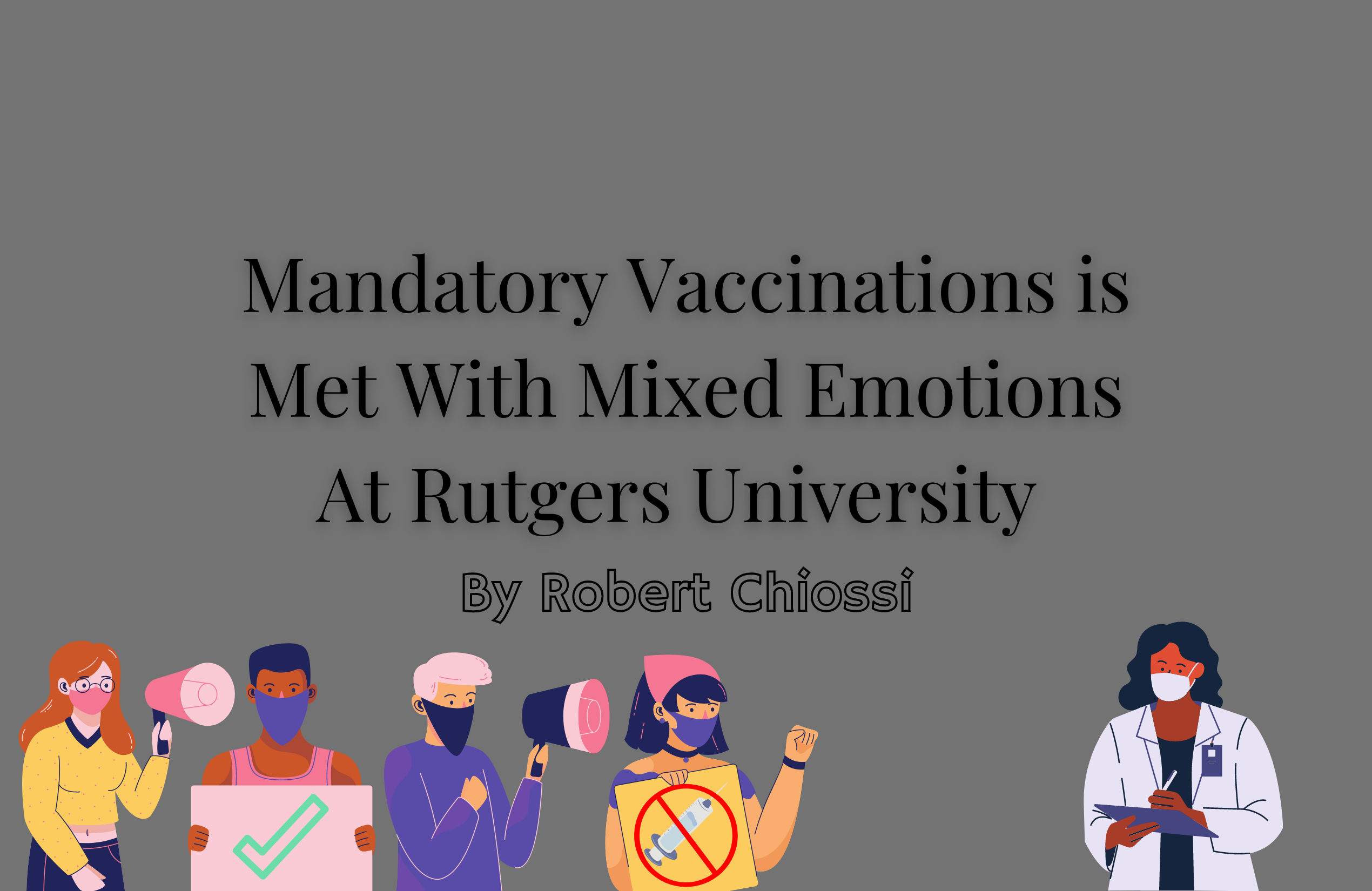 The decision by Rutgers University requiring that all students must be vaccinated for Covid-19 if they want to return to classes on-campus has been met with mixed reviews.

The decision, announced March 25, mandates vaccinations for approximately 13,451 students in enrollment, but doesn’t require vaccinations for its 1,575 person faculty and staff, though employees are “strongly urged” to register with the state and receive a vaccination against the novel coronavirus that causes Covid.

Rutgers was the nation’s first major university to require that students get the vaccination—though since more than a dozen colleges around the county have followed Rutgers’s lead.  Syracuse University, meanwhile, announced April 8 that students, faculty and staff would have to be vaccinated before being allowed to return to campus in the fall.

At Rutgers, proof of Covid-19 immunization will be required with limited exceptions. Students with religious or medical reasons may request an exemption. Also, students enrolled in fully online degree programs and off-campus Continuing Education programs will be exempt from showing proof of immunization. The mandate is comparable to Rutgers’s standing policy on immunization for students to show proof of measles, mumps, and rubella inoculations prior to on-campus attendance, which is not required of faculty and staff.

Rutgers University President Jonathan Holloway, in a news release, listed the benefits of receiving the vaccine to include prevention of serious illness, hospitalization, and death from the virus.  The benefits specific to the Rutgers community include a return to pre-pandemic normalcy and greater interpersonal collaboration among faculty, students, and researchers.

However, on January 8, in an interview with Sherri-Ann P. Butterfield, Executive Vice Chancellor at Rutgers University-Newark, students heard a different message than the one delivered by President Holloway.  In that interview, Vincente H. Gracias, M.D. Rutgers Vice President for Health Affairs, assured students that it was safe to receive the vaccination and went on to speak about the possibility of mandatory immunization.

“Well, this is America, and Rutgers is part of America. So, the vaccine, at this point, is not mandatory.” Dr. Gracias said in the interview. At the time, Dr. Gracias told faculty and staff that he believed that “our Rutgers community could vaccinate ourselves.”

Nearly three months later, the situation has changed, and there are as many mixed reviews about the recent mandate as there are about the vaccine itself. Concerns about the speed at which the vaccine was manufactured and the lack of study on long-term effects are on the minds of students and faculty alike. Those issues were topics of discussion on January 8. Dr. Gracias described the phases and process that both Pfizer and Moderna (vaccines available at the time) were subject to and assured that they were “safe and very effective.” He went on to say, “What we don’t know is, what are the long-term effects, two years, three years, ten years from now?”

Dr. Thomas Kenyon, Chief Health Officer at Project HOPE and former director of the CDC spoke about the public’s concern with immunization in an interview with Medical News Today. “Nobody is getting infected with a COVID vaccine. It is only the surface protein that would be replicated because we have given you the messenger RNA. It is not the entire virus,” Dr. Kenyon explained.

Still, there are students at Rutgers and those of the greater community who are not convinced.  Christian Rivera, a senior, said that he was “not a fan” of the mandate. “I am very cautious of what I put into my body,” he said. Rivera and other students are concerned that the mandate is only applied to the student body. “I’m upset because Rutgers is not holding their own staff to the same standards as the students,” he said.

Sidra Razzaq, a sophomore, received the Pfizer vaccine in March. She is excited to return to campus and has noticed a difference since classes went completely online last spring. “The in-class experience was far more interactive,” said Razzaq. “We’re still paying for an on-campus tuition and receiving an experience that isn’t as fulfilling.” She relates the recent mandate to the policies already in place. “We are required to be vaccinated to come to college anyway. We are pretty much vaccinated out of the womb in American society,” said Razzaq.

Jeremy Keitt , a junior, is concerned that the vaccine has not received FDA approval, as vaccines typically must. “I understand the vaccine has gone through various trials and levels of testing; however, because it is not FDA approved, I don’t think that I will be taking it,” said Keitt. “If someone offered me a drink they said was 99% safe, I wouldn’t drink it.” He said he hopes that students continue to ask the difficult questions “so that the opinions of the student body are heard by the Deans and the higher-ups at Rutgers.”

Robert Snyder, retired professor of American Studies and the former chapter President for the American Association of University Professors-American Federation of Teachers (AAUP-AFT) at Rutgers Newark has always encouraged his students to apply critical thinking.

“A healthy degree of skepticism is a useful thing in life, but in this pandemic, distrust of legitimate scientific sources and news media has crippled our response to this pandemic,” said Snyder. He has been vaccinated and spoke of the headaches that were involved with the registration process. He believes that computer skills shouldn’t be a prerequisite for receiving adequate health protection. “It’s very bad that ordinary people have to work so hard to get the vaccine.” Snyder added, “This is a pandemic; we will only solve it if we work together.”