From the Rutgers Targum to Asbury Press Park , seasoned photographer,Thomas Costello recounts his award-winning coverage of the Jan. 6 insurrection 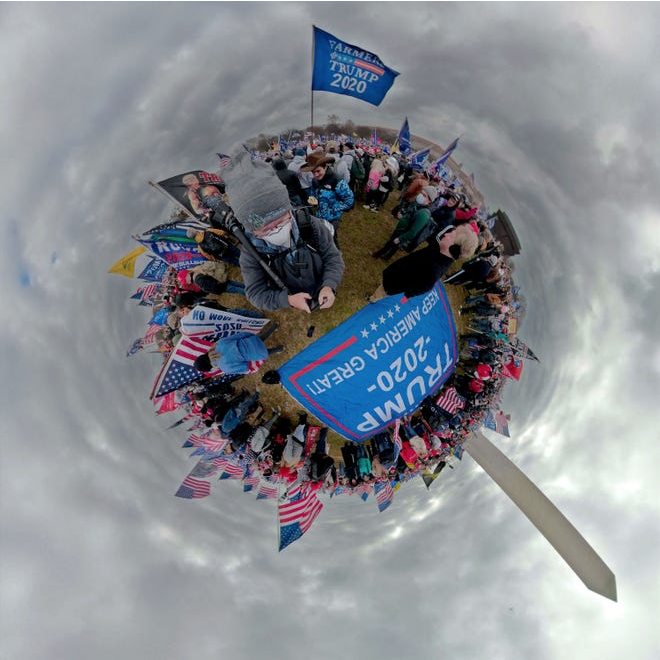 -The Photojournalist recently won the ‘Courage under Fire’ award for his coverage on Jan. 6

Picture a crowd converging on each other, derogatory words being shouted, rioters taking over media equipment, flags being used as weapons, tear gas being thrown, and chaos raging on a day a peaceful march was to occur. This is what we know today as the Jan. 6 insurrection. Seasoned journalist, Thomas Costello, who recently received the ‘Courage under fire’ award for his bravery, was amid it all. In an interview with our Copywriter, he recounted the experience and gave advice for upcoming journalists.

Congratulation on the ‘Courage under fire award, it was well deserved. How did you feel receiving it?

Thank you. I was surprised. I look at it as I’m there doing my job. You never want to get hurt because that takes you out of the game. You want to get the images your paper needs and keep working. I didn’t think a lot of the whole situation until someone ran in front of my camera and said, “Do you realize you’re recording history?” and I was like “Yea, I guess so,” [as] we’re right in front of the capitol and the rest of the world has lost us.

You said you thought you were going to cover a march, what came to mind when you realized it was more than that?

My job was to cover the march from the Washington Monument to the Capitol building. I was there with USA Today and was partnered with another photographer from Wilmington, Delaware. He was shooting stills and I was shooting video. On the USA Today home page, we have a grid of different events going on and, in this case, it was different Lives they had gotten around Washington DC.  So, I thought we’d go to the Capitol and some people would wave flags and have speeches but by the time we got [there], it was shoulder to shoulder people for a block around. I could see there were people on the steps of the Capitol building and my first thought was “Oh they shouldn’t be there.” People were filling the camera stands where cameras would be for the inauguration. Everyone was on top of each other. It was just crazy to see how many people were there. They were definitely Trump supporters, all of them, and not wearing masks. I was getting yelled at, “fake media,” “take your mask off,” “what are you afraid of?” There were a couple of times where I had people converge on me and say, “You don’t belong here; you can leave,” and I would just back out and keep the camera rolling.

Weren’t you scared when the situation escalated?

Ironically, I was not. I had a helmet with me, but I didn’t put it on. I like to have [it] nearby and not on me because I think it says whack me on the head. I was wearing a bulletproof vest that day [which] would’ve prevented me from getting shot or getting stabbed to a certain extent. One of the ironic things I saw people using as a weapon were American flags on poles. My boss was watching the Live feed so he would know where I was so if anything happened, they would hopefully be able to send someone to get me out of there.

What are your tips to remain composed in a situation like that?

Something my editor wrote on a board a long time ago and it’s just, “Do your job.” Just do your job until you feel it’s not safe to do your job. One thing I did, I shot selfies for people around me. So [when] I saw people struggling to get a photo I’d say “Here, let me help you with that.” So, I got a ring of people I was nice to and kind of had a little security in that area. [When] I got the feeling the crowd was changing I backed up a little, [which] is what I did after being in that spot for about an hour. I backed up to another spot where I could have my back up against the wall where I knew no one was able to sneak up behind me.

Would you credit any particular training for your composure?

You know, it’s experience and being in similar situations; we’re coming off a year of Black Lives Matter and violent protests. It’s just a matter of always having an escape route. You [have to] always be situationally aware of what’s going on around you. I think the best coverage is to be in the middle of it.

You sure have a lot of experience, being at the Asbury Park Press since 1988.

Yea and I freelanced probably 10 years before that. I started at the Rutgers Targum in New Brunswick.

What about your gear?

It was a long day. Luckily, I didn’t carry all my gear so that made it a little bit easier. I had a backpack video transmitter and a Sony NX5. All my stills were pulled from the HD video camera. On that day I took a smaller camera than I would normally use because a shoulder-mounted camera meant I couldn’t see anything happening to the right of me. The one picture that made the USA Today was done with an iPhone. I teach a multimedia tool kit class at Montclair State, and I tell them “Look it doesn’t matter what camera you have. It just matters who operates the camera, how you think before you take that image, and how you’re going to frame it. I lucked out as I took photos not many others had. The camera was on a monopod. I like to do what’s called low-budget arrows where I can get the camera a couple of feet above my head which helps to show the crowd size instead of just watching people at eye level all the time.

Is there anything this experience taught you that you’d warn others about?

One thing I noticed, there were a lot of people there with cameras who I would question why they were there. I had a major news organization backing me up but there were some students just doing [it] for the experience and you got to think when you’re doing something like that, you’re going to be responsible for your injuries. No one is going to pay your hospital bills to make sure you’re better, it’s all you. It’s a risk. I wouldn’t’ send my students in a situation like that.

It was a chaotic scene so how did you know where to focus?

From what I understand I was live on the USA Today home page for about an hour and a half where they got a good enough signal. What allowed me to go live for a longer period was the police fired tear gas down to the area I was in which cleared out some of the people. You clear out the people then that clears out some of the cell phones which allowed me to have more bandwidth to work with. There’s a lot of technology that goes into it but the backpack has four cellular cards in it so even if I’m only having 25% on each cellular phone card, in the cloud it takes those 4×2 and bonds it and I get a good signal. It’s just good technology from where we were 10 years ago.

How have you adapted to those technological changes?

I’m a gadget guy so whenever new technology was being introduced, I would hop on right in the beginning. I was one of the first newspaper photographers who was shooting and editing videos for our websites. Back then the video was 240 pixels wide, and it would take five or six hours to upload it to the web. I could send one min and a half project from my car in maybe five mins, so the technology is really great for getting stuff out fast. With USA Today I’m going live, and other people are recording [it], cutting it up, and redistributing [it] to the network. So, by the time I finally shut my camera off at night they said “okay, have a good night.” I didn’t have to do any edits; it was all done by the people in our video production center.

Any advice for student journalists?

Learn your multimedia ninja skills. When I started, I was a black and white newspaper film photographer. [Then] digital came along and we had to learn digital, the limitations, and how we could use that to our advantage in telling stories. Then video came along and now there’s websta. So, you have to have all those tools in your toolbox to be a good journalist. If we, by chance, had a photographer opening and someone said, “yea I just shoot stills” and no video they would probably not be hired. So, you have to be a still photographer, a video producer, be able to collect good audio and do social media and get images back to our clients no matter what. There’s no excuse. When I started, our deadlines were by 5 p.m. They need their pictures in for the next day. Now, the deadline is usually right as you shoot. They want it now because they want to post it on the web. Long gone are deadlines and you just need multimedia skills.

*A previous error stated the photographer Costello was partnered with was from Remington and not Wilmington. It has now been updated to Wilmington.