Devonta Smith Makes History But Will It Change Anything? 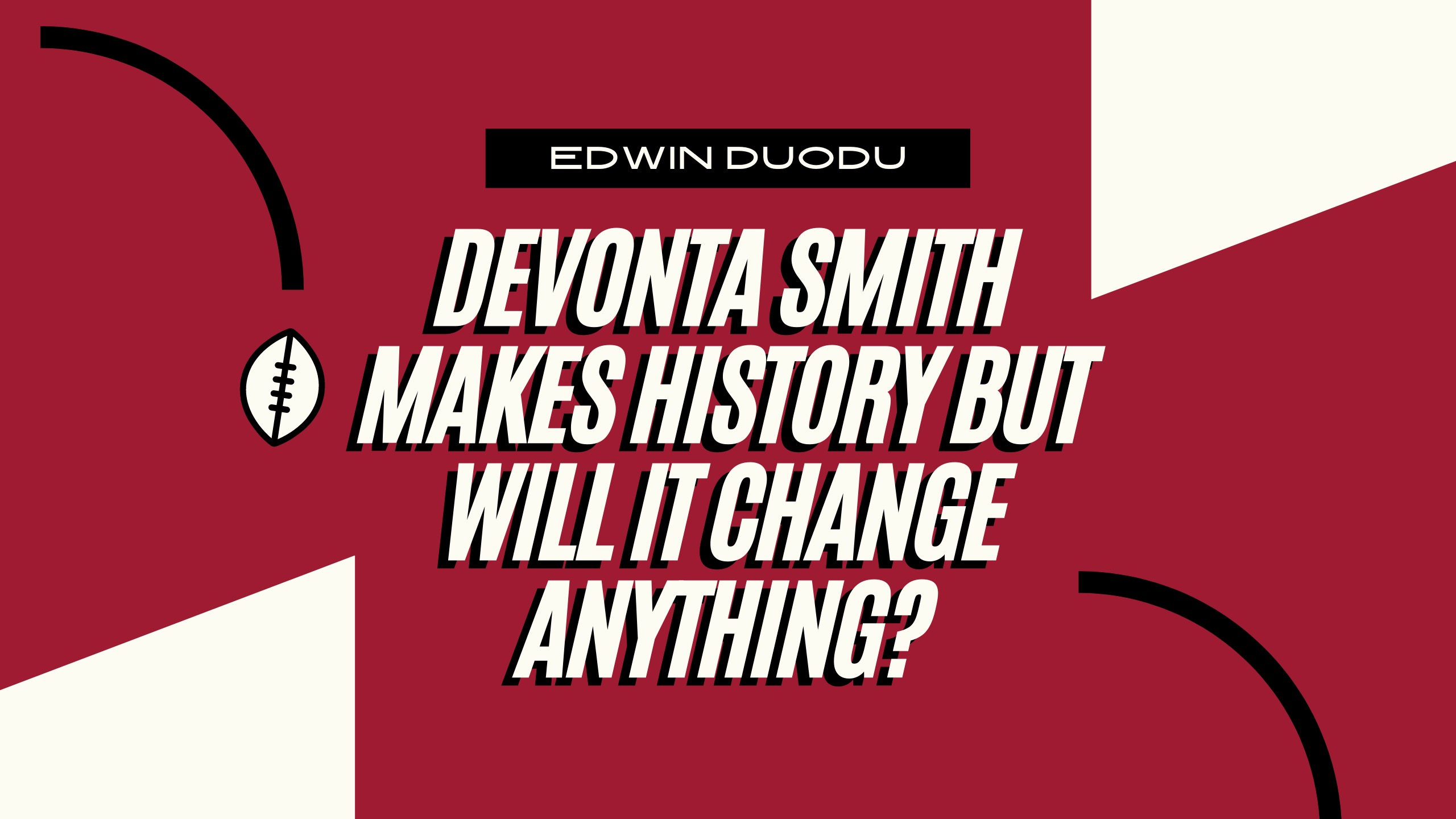 DeVonta Smith has recently made history by becoming the first wide receiver to win the Heisman trophy in nearly three decades. The wait for a receiver to claim the award is finally over, making Smith just the third Alabama player win it. The task was daunting for him, to say the least, as he had to triumph over Florida’s Kyle Trask, Smith’s teammate Mac Jones, and the soon to be number one pick in this upcoming draft, Clemons’s Trevor Lawrence. All three put together some phenomenal seasons, confirming why the country nominated them in the first place. However, Smith put a strong case, showing why he deserved the most prestigious award in all of college football. He recorded 105 receptions for 1641 yards and a whopping 20 touchdowns, demonstrating how important he is to the electric Alabama offense. One has to wonder, however, if Smith had a more profound impact in regards to winning a Heisman trophy.

For years the Heisman has been awarded to either quarterback or running backs. That has created a stigma that other players who play different positions can’t win after a great season. This instance is similar to the Most Valuable Player (MVP) trophy that the NFL awards every season. In the minds of many fans, a quarterback has the best chance of winning. Not only is the variation at a small percentage, but the gap between offensive and defensive players is massive. The Heisman has turned into an award only offered to offensive skill position players. Charles Woodson, a former defensive back who played for Michigan State, was the last to win it in 1997. This occurrence happened six years after the previous receiver won the award. Since 1997, the outcome of a quarterback or running back winning the Heisman has been the likeliest and has looked unassailable at times. What type of season must these players have to be considered, let alone win the award? The simplistic answer would be to have video game numbers.

This past season, we saw DeVonta Smith put unprecedented numbers, in some cases historical, at the receiver position. It would’ve been difficult to ignore him as a possible candidate for this year’s ceremony. History says quarterbacks and running backs make up 90% of winning. It means DeVonta Smith had a small chance to win the award as a whole. We could also make a case that the Heisman trophy is a quarterback’s award to lose. Arguably the most crucial position on the field, NFL scouts seem to be more enticed with how a quarterback in college could perform at a professional level, regardless if he records great numbers or not, diverting the attention from other positions. Brandon Carroll notes this in his article “Will a Non-Quarterback Win the Heisman Trophy Ever Again?”

Carroll emphasizes how “The way the game is being called-especially offensively- is at an all-time high, including designed quarterback runs, playing to the hand of their signal-callers.”

The running back position seems to be the only one that can potentially challenge every season with the quarterback. If the Heisman trophy is a quarterback’s award to lose, it slightly lowers the odds of a running back winning and greatly dismisses the odds of any other position. Any offensive player outside of quarterbacks and running backs would have to excel in a season to win the award. Defensive players would have to work twice as hard to be in the running. Unfortunately, no position outside of quarterback would be able to compete with the production, popularity, and in some cases, the talent that quarterback possesses every year. The trend may continue to happen. This year was an outlier compared to previous years. DeVonta Smith was a small glimpse of hope to college fans who wish to see some diversity. He made us remember that other positions are capable of being recognized at a high standard. We may never forget his season, and if it’s any indication of the potential diversity we will see in the future, Smith would’ve been the start of that journey. If not, his historic season may be buried under the quarterbacks and running backs to win it in the future.