Colorism and Privilege Amongst People of Color

Published on January 6, 2021 by theobserver 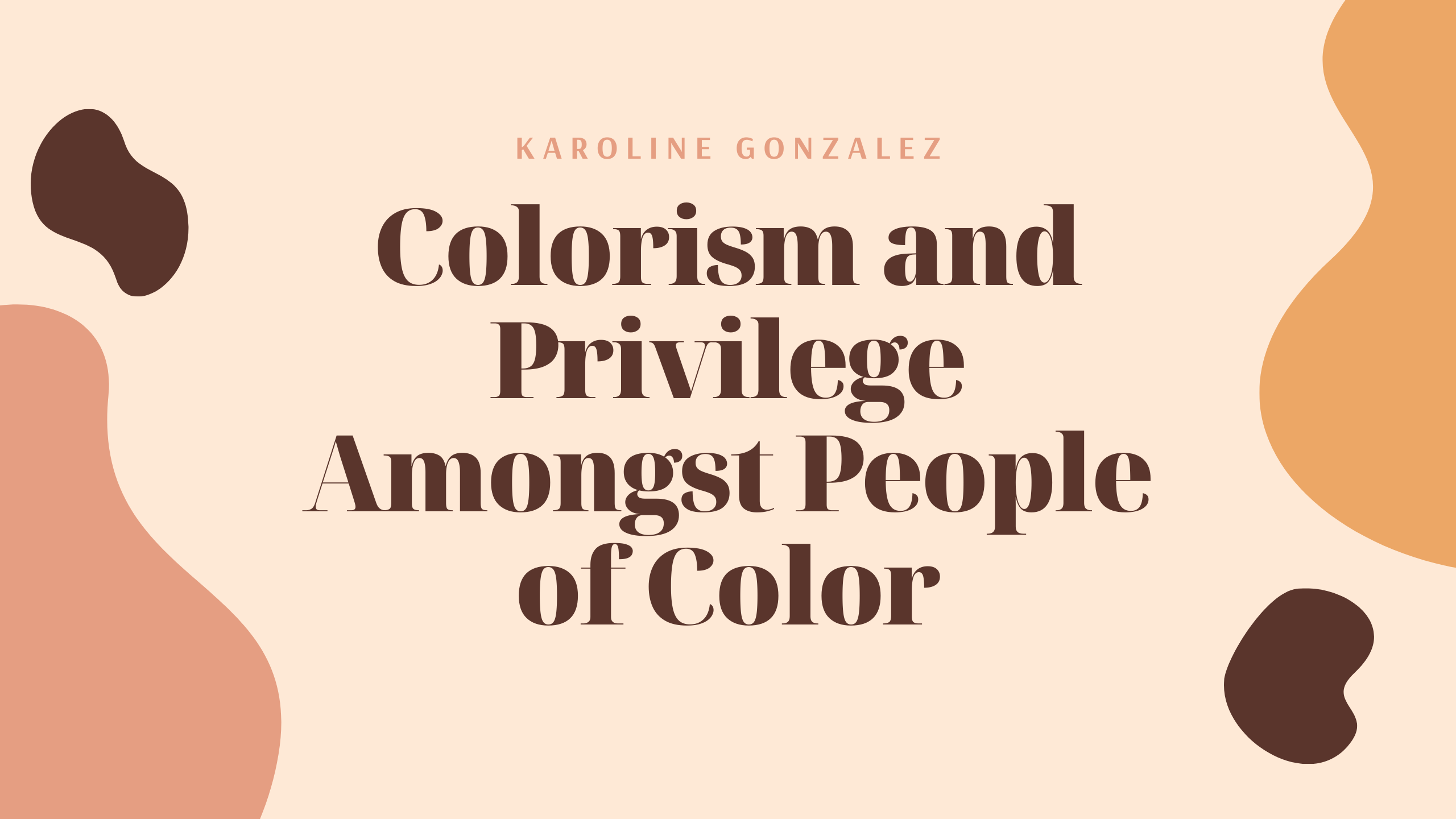 A person’s identity is a complex concept shaped by a plethora of factors. Your individual characteristics, the people you surround yourself with and what they say or think about you, your historical background, interpersonal relationships as well as social and political contexts are all involved in the process of becoming familiar with who you are. In her essay, “The Complexity of Identity: ‘Who Am I?’” Beverly Daniel Tatum describes this concept to be a multidimensional aspect of the self as opposed to a flat, singular doctrine, once again fueled by various perspectives. As humans, we are born into the nature of our initial identity; beliefs given to us from a young age by the people in our lives. As we grow older, we are nurtured by the environment that we are placed in as well as the challenges and experiences that come down the line. Often times, our identities place us into a category of “otherness,” alienated from those who are considered the majority or the dominant group, e.g., Black and White people or Cis- and Trans-gender folks. Communities that are considered to be minorities are often made aware of their identities due to the constant endurance of microaggressions. An individual in the marginalized group may find it difficult to look beyond their oppression when in reality, privilege, even amongst minorities, is a real interfering factor and can be seen in different instances like gender identity, ableism, language barriers and colorism, amongst many others.

Researchers describe colorism as the discrimination towards a person of darker complexion often within the same ethnic group, favoring lighter skin tones. For ages, Western European features have been deemed acceptable while the black race is placed at the very bottom of the food chain. This is as much of a problem within the Latinx community as it is amongst African Americans in the United States. When it comes down to it, we are all oppressed groups, so why do we discriminate against our own people?

I come from a small island in the Caribbean that you would probably encounter while browsing for your next getaway destination. Known for its beautiful beaches, rich culture, and exquisite food, the Dominican Republic was home for the first thirteen years of my life. I would never wish my roots to ground elsewhere, and it is because I love my homeland that I can point out the negative aspects,, in hopes of change. The Dominican Republic is a melting pot of races yet houses a deep-rooted colorist and anti-black behavior that is continuously passed down through generations. Growing up in a fairly mixed family, I was used to seeing family members with prominent African features; some even being of a darker complexion than mine. Due to my surroundings, I was never ashamed of my heritage or physical features. It wasn’t until I was of a mature age that I started to notice the differences between white-passing Dominicans and people like me, along with the stigma surrounding those pertaining to the black race. I can vividly recall an instance in primary school where a classmate brought a set of makeup for the girls in class to covet and play with. As I reached to apply some myself, she dismissed me with as much condescendence a six-year-old could muster: “Not you” she said, “You can’t use it because you’re black.” Younger me did not immediately register the full impact of her words, nor the indirect hatred and racism being conveyed through them. As I got older, my mind could not help but bring this memory to life every so often, and with every passing day, I was able to understand them better. One thing was clear, no one should experience any form of discrimination at such a premature age, least of all from their peers.

Not too long ago, I held a conversation with a close friend where we discussed issues of racial inequality and colorism amongst people of color. Aileen Naranjo, 20, is a third year Rutgers student of Ecuadorian and Guatemalan decent. Being born in the United States and raised in Newark, she has witnessed the unfair experiences of fellow Latinx folks and other people of color. “As a white passing Latinx woman, I am aware that my physical features immediately grant me privilege” she said, “The Latinx community is already a marginalized identity and yet we hold bias against each other instead of being inclusive and pillars of support.” Racial discrimination amongst oppressed groups comes from a long history of survival and worship of European standards. This behavior and perpetuated discrimination against our own are deeply embedded in the minds of those who refuse to see beyond a world of white-washed history and colonization.

In her essay “Theoretical Foundations for Social Justice Education,” Lee Anne Bell wrote: “We thus understand that each of us combines privilege with marginalization, in different proportions, according to our different social identities and social locations, and that these proportions of advantage and disadvantage inevitably shift according to time, place, and situation.” Blinded by the identities oppressed by society, we often tend to forget that there are other aspects of the self that grant us a sense of privilege. In a country as diverse as the United States, and even the global scope, where people of color are constantly humiliated, it is important to first acknowledge this reality and then continue to uphold uncomfortable yet important conversations in order to challenge and combat these learned anti-black behaviors.